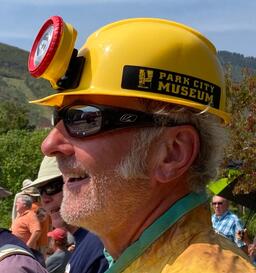 Return to About Us page...

Sandy Brumley enjoys keeping one foot in Park City, while having the other planted in Manhattan. He
and his wife, Teri James, moved to PC five years ago to ski, and decided to stay. Most of the
time, when not traveling the world from pole to pole and across every meridian, he loves reading
newspapers, particularly those published before 1955 about Park City.
​
Sandy was so taken by the history of The Park, as it was known in the 1880s, that he has adopted its
study as his official obsessive-compulsive disorder. He is freely willing to express this OCD on busses,
hikes, skiing; bike tours. Switch him on, and he just keeps talking, unless he sees a raised hand… or even an eyebrow.

Ask him about the screenplay he's writinabout a controversial murder in Park City in the late 1800s.